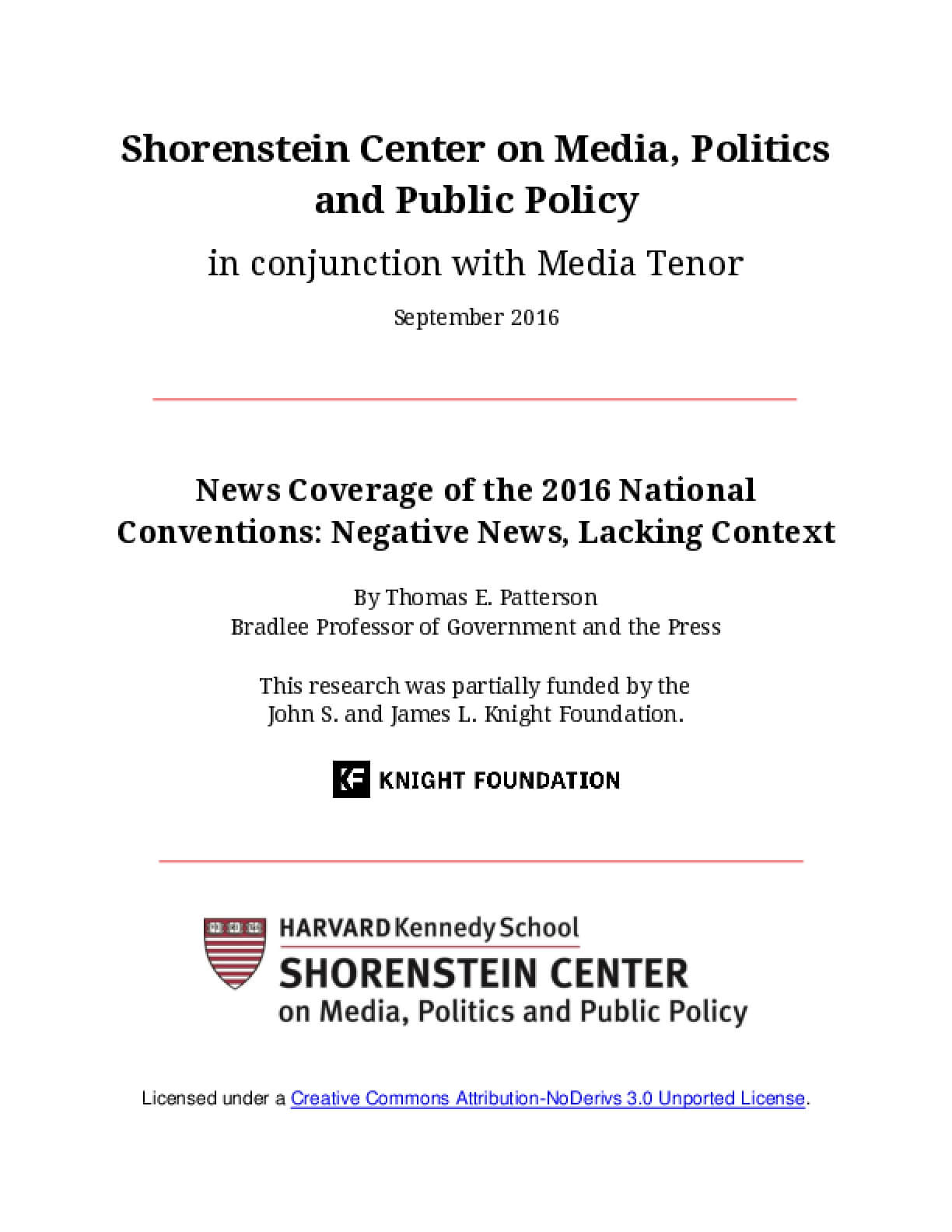 A new report from Harvard Kennedy School's Shorenstein Center on Media, Politics and Public Policy analyzes news coverage of the 2016 Republican and Democratic national conventions, and whether this coverage, which was overwhelmingly negative, best served the needs of the public.This report is the third in a multi-part series of research analyzing news coverage of candidates and issues during the 2016 presidential election. The study examines news coverage during the four-week convention period, starting with the week prior to the Republican convention and concluding with the week following the Democratic convention.The daily news audience is larger than that of the convention viewing audience, meaning that many people learn about the conventions through the news media's version of the events. Coverage of Donald Trump continued to outpace that of Hillary Clinton during this period, but, notably, both candidates received negative coverage.Negative news reports about policy positions, for example, outnumbered positive reports 82 percent to 18 percent. Trump experienced a reversal of the "good press" he had received earlier in the campaign, with his reaction to the Democratic convention speech of Khizr Khan generating the most negative attention. Although Clinton's coverage was more positive than Trump's, it was still negative on balance, with a full tenth of her coverage revolving around allegations of wrongdoing.What appeared to be missing from this negative coverage, however, was context. For example, although Clinton's email issue was clearly deemed important by the media, relatively few stories provided background to help news consumers make sense of the issue—what harm was caused by her actions, or how common these actions are among elected officials. And in keeping with patterns noted earlier in the election cycle, coverage of policy and issues, although they were in the forefront at the conventions, continued to take a back seat to polls, projections, and scandal.This Shorenstein Center study is based on an analysis of news reports by ABC, CBS, CNN, Fox, the Los Angeles Times, NBC, The New York Times, USA Today, The Wall Street Journal, The Washington Post, and The Washington Times. The study's data were provided by Media Tenor, a firm that specializes in the content analysis of news coverage. The research was partially funded by the John S. and James L. Knight Foundation. 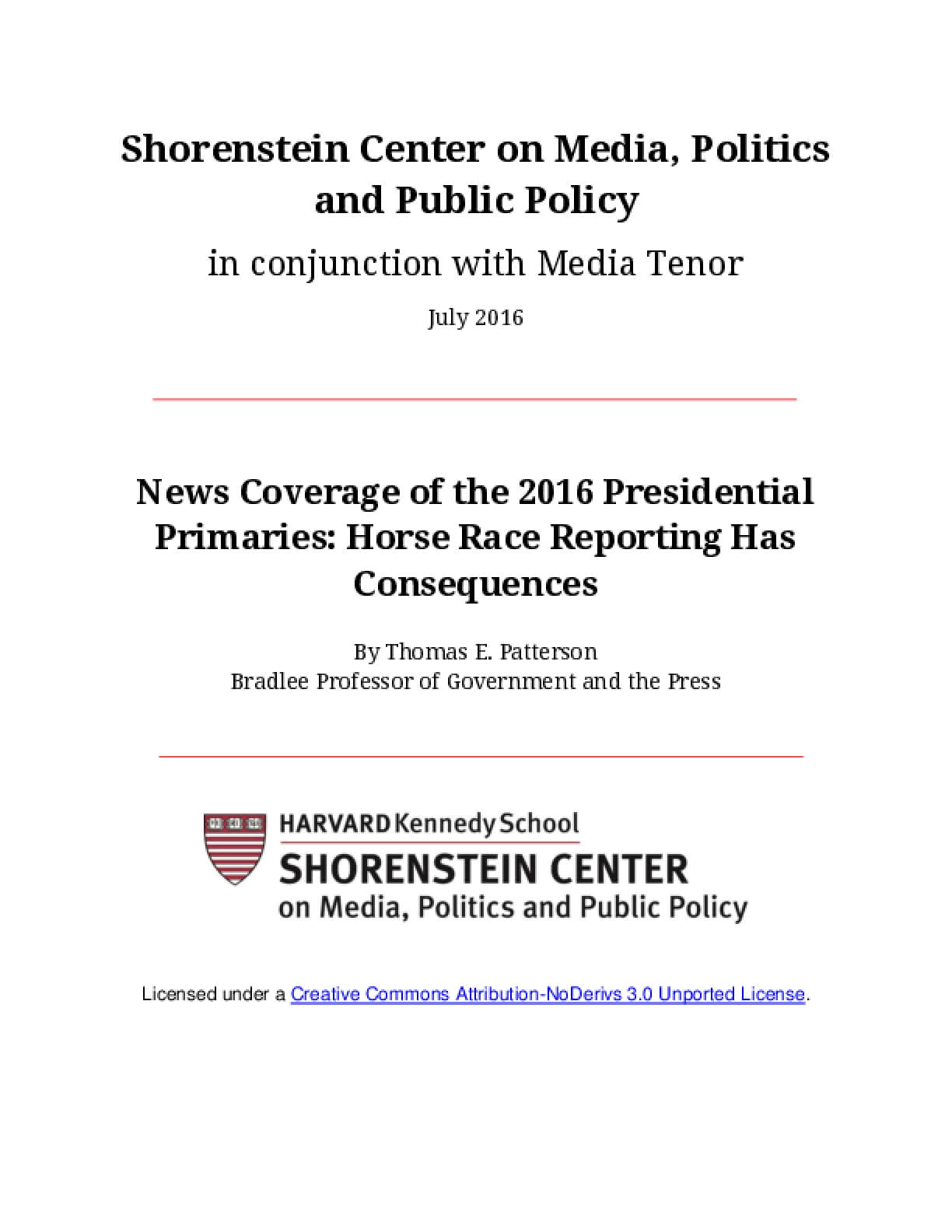 A new report from Harvard Kennedy School's Shorenstein Center on Media, Politics and Public Policy analyzes news coverage of the 2016 presidential primary races and how it affected the candidates' chances of winning the nomination, concluding that coverage of the primaries focused on the horse race over the issues – to the detriment of candidates and voters alike.The report picks up where the Center's previous report concluded, analyzing coverage of Donald Trump, Ted Cruz, Marco Rubio, John Kasich, Hillary Clinton, and Bernie Sanders from January through June 2016.Some of the questions Patterson investigates include:Why did Trump receive so much more coverage than the other presidential candidates, and why was his coverage positive in tone when the Republican race was still being contested and yet negative in tone after it had been decided?Why was Rubio's coverage so much more negative than that of another unsuccessful Republican contender, Cruz?Why was Clinton's coverage substantially more negative than Sanders', and why did Sanders get so much less coverage than she did?Why did the candidates' character and policy positions receive so little attention relative to the candidates' chances of winning?The Shorenstein Center study is based on an analysis of news statements by CBS, Fox, the Los Angeles Times, NBC, The New York Times, USA Today, The Wall Street Journal, and The Washington Post. The study's data were provided by Media Tenor, a firm that specializes in the content analysis of news coverage. 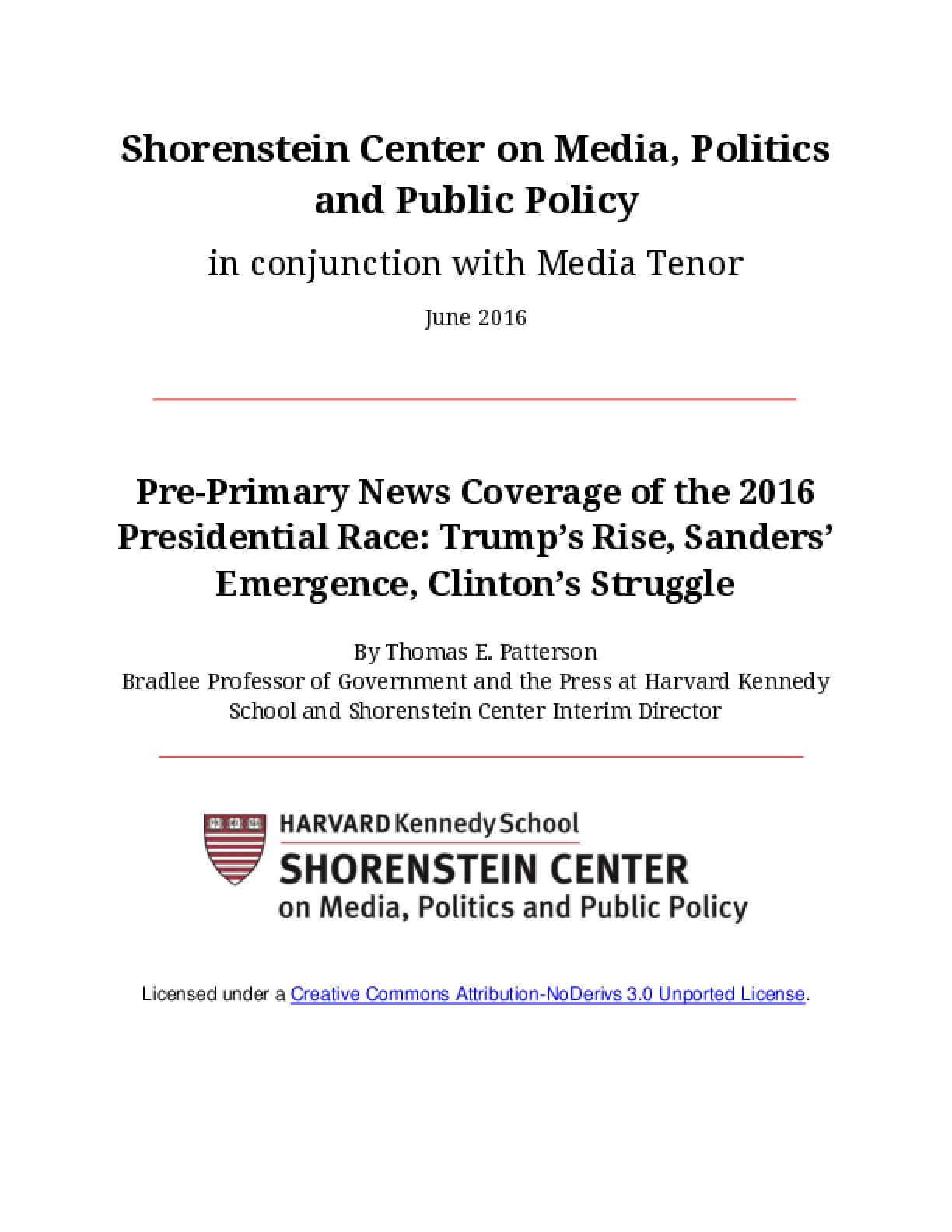 A new report from Harvard Kennedy School's Shorenstein Center on Media, Politics and Public Policy analyzes news coverage of the 2016 presidential candidates in the year leading up to the primaries. This crucial period, labeled "the invisible primary" by political scientists, is when candidates try to lay the groundwork for a winning campaign—with media exposure often playing a make or break role.The report shows that during the year 2015, major news outlets covered Donald Trump in a way that was unusual given his low initial polling numbers—a high volume of media coverage preceded Trump's rise in the polls. Trump's coverage was positive in tone—he received far more "good press" than "bad press." The volume and tone of the coverage helped propel Trump to the top of Republican polls.The Democratic race in 2015 received less than half the coverage of the Republican race. Bernie Sanders' campaign was largely ignored in the early months but, as it began to get coverage, it was overwhelmingly positive in tone. Sanders' coverage in 2015 was the most favorable of any of the top candidates, Republican or Democratic. For her part, Hillary Clinton had by far the most negative coverage of any candidate. In 11 of the 12 months, her "bad news" outpaced her "good news," usually by a wide margin, contributing to the increase in her unfavorable poll ratings in 2015.The Shorenstein Center study is based on an analysis of thousands of news statements by CBS, Fox, the Los Angeles Times, NBC, The New York Times, USA Today, The Wall Street Journal, and The Washington Post. The study's data were provided by Media Tenor, a firm that specializes in the content analysis of news coverage. 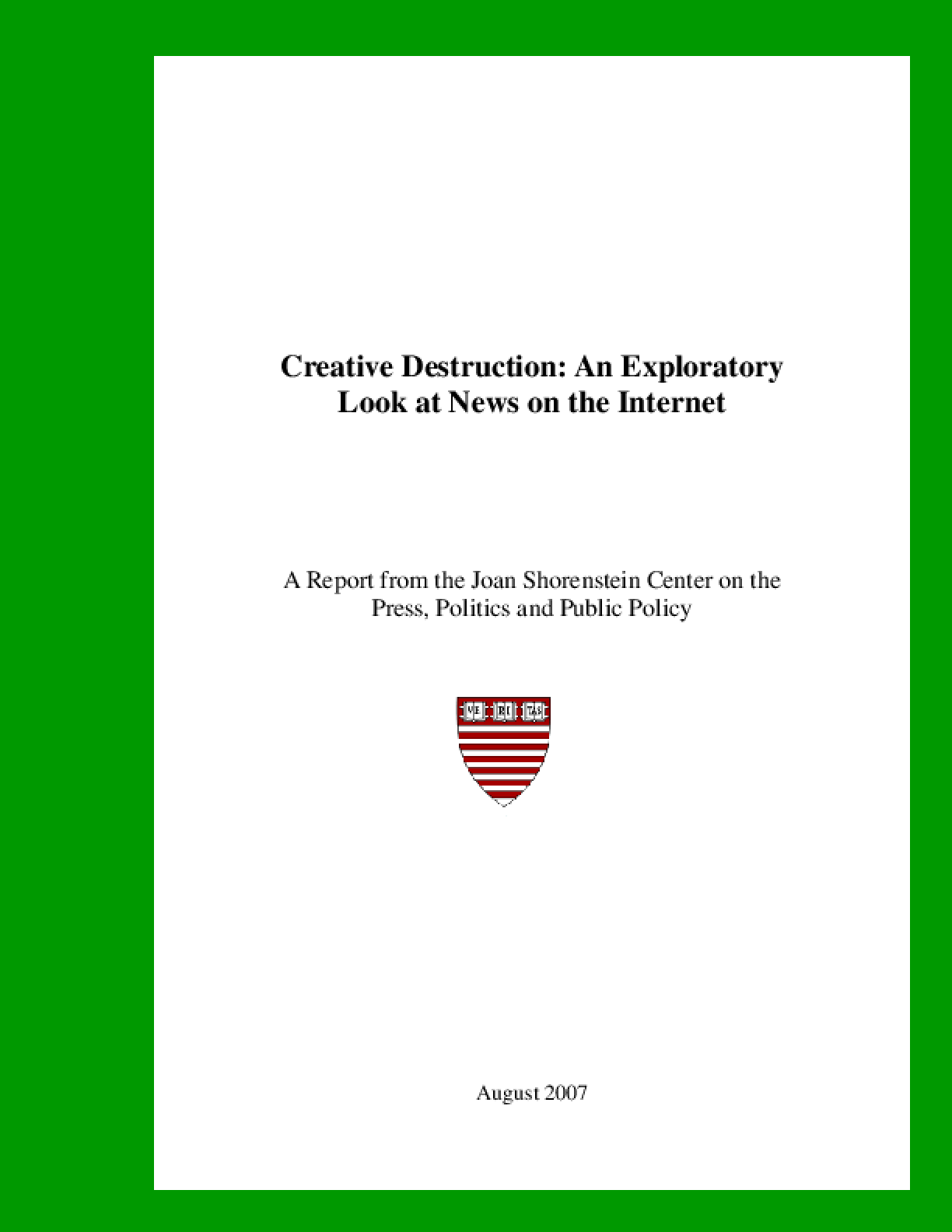 Creative Destruction: An Exploratory Look at News on the Internet

Examines trends in Internet traffic to 160 news-based Web sites, with a focus on the rapidly expanding sites of national "brand-name" newspapers and television networks, and their effect on local and traditional news organizations. 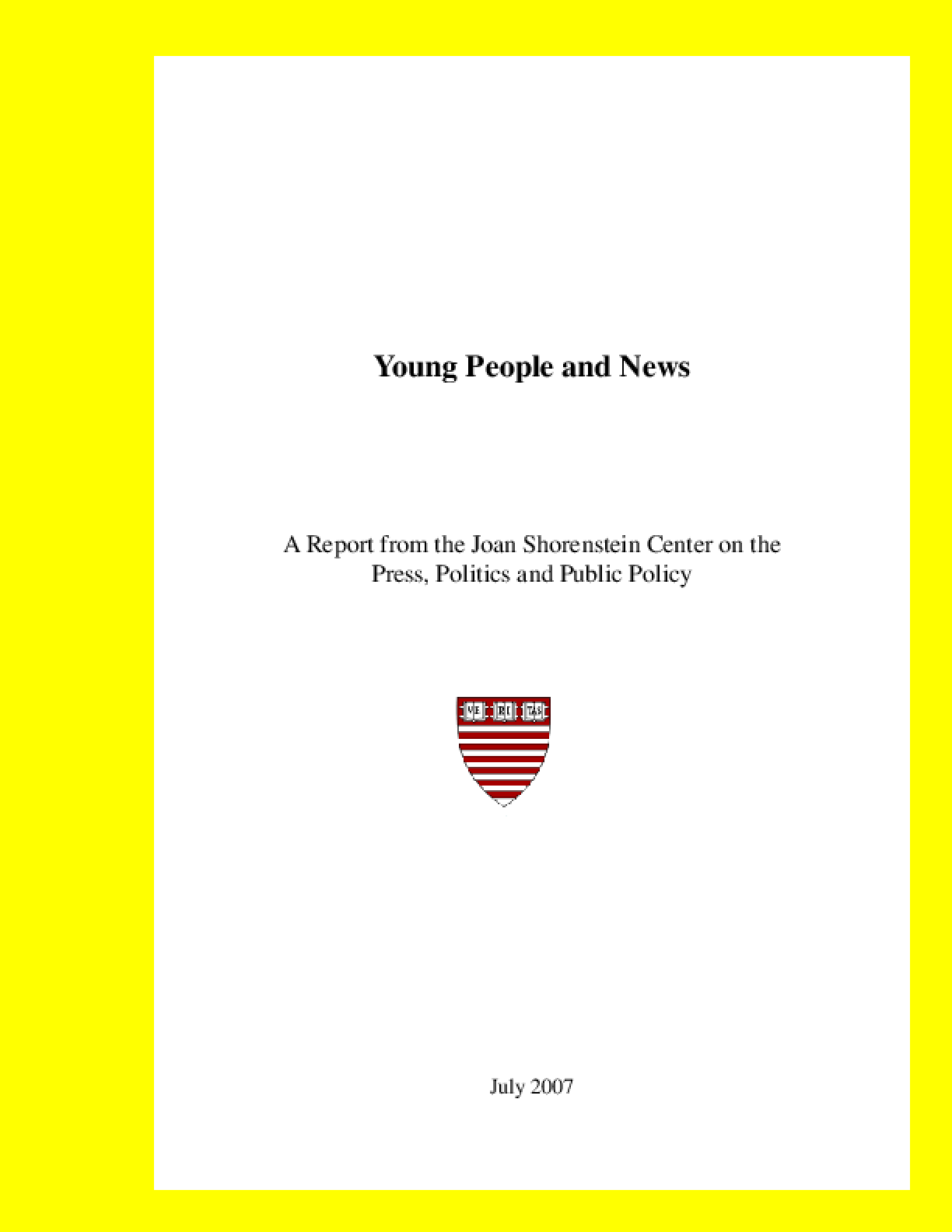 Presents survey findings on the daily news consumption of young Americans compared with that of older adults -- the sources, medium, frequency, depth, and selectivity of news exposure. Discusses issues of defining news consumption and implications.